This is surely to be one of many posts with the above title, as one of my goals of this site and blog is to share my experiments in the kitchen with friends, family, acquaintances, and anyone who cares to click and read! I have re-kindled a love and passion for cooking, which sometimes I like to frame as playing with my food.

That was true last night, as at one point I was literally dancing around the kitchen, while also self-narrating my antics in a sports commentator-esque display of wild enthusiasm. Something along the lines of this clip of Pat Foley announcing the long-awaited 2010 Stanley Cup win for the Chicago Blackhawks or this video featured on SURFING Magazine’s site — a “Best Of” compilation of surf commentator Dave Wassel. Except mine was done with an obscurely mixed up British/Aussie accent, of course. My fella happened to think this was quite entertaining (albeit distracting while he was trying to do some “work” or something), and I managed to get both of us laughing. So, as you get deeper into the recipe, you can imagine me running through my Brooklyn kitchen, asking the room “Can she pull it off it again, folks?!?” in a loud, crazy accent, and joyfully anticipating the layers of awesome flavor about to get handled with this bangin’ dinner!

Ok, so now on to the good stuff. I’ve had frozen shrimp in my freezer for about a month and was just never inspired to do anything with it. Until it dawned on me that I’ve been using coconut milk for a whole bunch of different purposes lately (smoothies, quinoa “cereal” for breakfast, paleo sweet potato pancakes, etc.), and that I’ve often seen and probably tried a version of spicy coconut milk soup someplace, sometime before.

Enter a few moments with our good friend Google, a look through a few different recipes, a glance at what we currently had in the fridge/pantry, and voila! I present to you… 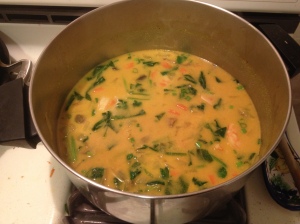 the beauty of a one-pot meal… less dishes!

This Will Take You…

About 3 really hungry or 4 normal people

This Is What You Need…

This Is How You Turn That Stuff Into a Delicious Meal…

so many flavors, so little time

Get a big pot or saucepan. Put a little coconut oil (or whatever oil you prefer to cook with) in the bottom and turn on heat. Once hot, add in onions and carrots, stirring to simmer in the oil. Turn heat to medium and let those guys soften for a 3-4 minutes. Add your mushrooms and give it another minute or two.

Next, add in all your broth ingredients: the veggie broth, fish sauce, spices, and coconut milk. Bring to a boil. Then, reduce to simmer and cover for about 10 minutes.

Ok… if you don’t have fish sauce then you have two choices: A. buy some because it’s useful and delicious in Thai and other Asian dishes or B. leave it out and as you’re tasting the broth, see if you need to add any more salt. You most likely won’t need to because veggie broths tend to have enough sodium on their own. Also, my fish sauce has a hint of sugar in it according to the label, so if you’re really strict, this obviously makes it un-Paleo. Or just… you know… live a little. Curious about fish sauce? Check out what Darlene has to say about the subject.

After 10 minutes, add your shrimp to the broth (I defrosted/peeled my shrimp under cold running water in 5 minutes while my broth was gettin’ all riled up on its own in the pot). Cook for three minutes or until done (flesh is white and opaque, tails pink if left on).

Remove pot from heat. Stir in your washed handfuls of spinach, the scallions, and lime juice. Revel in the spicy, buttery, complex magic you have made in a relatively small amount of time.

The option is to cook a small pot of red quinoa once you’ve got your broth going. You can place the cooked quinoa in the bowls before you pour in the soup and it will serve as a nice, nutty texture and base to the bright yellow broth. Makes it more of a full meal if you’ve got really hungry peeps. 1/2 cup dry quinoa will serve 2-4 people, depending on if you want a little or a lot.

That’s it! Share with friends. Go back for seconds. Tweak to your liking. Leave comments for feedback or questions. And enjoy! 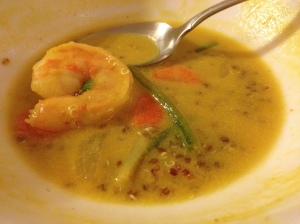 the end of the second helping